On 27 February 2019, clearance operations in accordance with the UXO clearance project of the “Ćuprija – 2” location were completed.

On this project developed by the Mine Action Center, which controlled quality of the works, clearance was conducted by the Russian state agency "Emercom”, namely, its specialized organization "Emercom Demining", which for tenth years in a row has been carrying out UXO clearance in the vicinity of the military depot in Paraćin, in which occurred a fire and explosion on 19 October 2006. 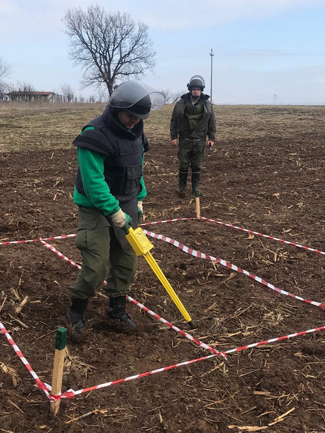 The project area totaled 606.000 sqm, and 116 pieces of unexploded ordnance (UXO) were found and safely destroyed.

By implementation of this project, the danger UXO poses to humans and the environment has been eliminated, contributing to an increase of security of population and creation of opportunities for the safe use of land and forest exploitation.

The project was funded by the Government of the Russian Federation within the assistance to the Republic of Serbia in UXO clearance of its territories and facilities.